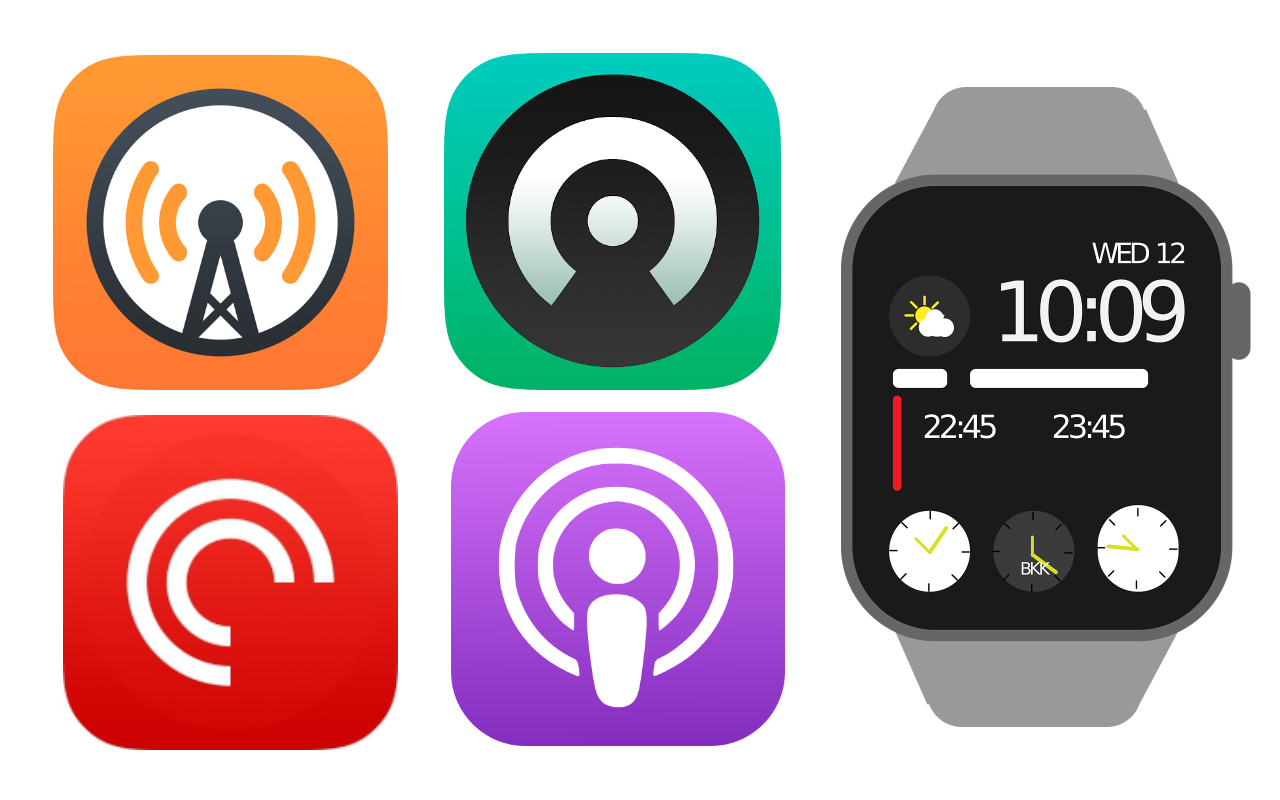 When running alone, I fill the time with podcasts.

I bought Apple Watch Series 3 (Wifi) in 2019. With the Watch, runs require only Bluetooth headphones. No more awkwardly carrying my phone. 1

First, a disclaimer. This feature is hard. Overcast developer Marco Arment has said how hostile watchOS is to third-party developers. Any long-running or computationally expensive operation (like, say, downloading a two-hour audio file) is first on the OS’s hit list. On some episode of ATP, he posited there is no implementation of offline Watch playback that makes everyone happy. He’s probably right.

This post will discuss where some podcast apps come short, but let’s acknowledge any kind of offline Watch playback is a minor miracle. All of these apps have good developers trying their best in an extremely hostile environment.

Apple Podcasts is built into the OS and supports offline Watch playback. You can select which shows or stations to sync to the Watch.

I love listening to comedians wax rhapsodic about Robocop for two-and-a-half hours, so this is a dealbreaker.

If I’m wrong about the time limit, or there is a workaround, please let me know. The problem could be general sync flakiness or something else.

Overcast used to have the implementation of offline playback that fit my needs best. Before, I could manually start a sync, track its progress, and run when it finished. Unfortunately, an update last year changed that.

In the new system, you set a playlist to download up to 20 episodes to the Watch. Overcast says it will download the episodes on wifi when charging. For me, it almost never did. 2

Maybe it’s because I have a creaky, slow Series 3 Watch. Maybe I was doing something wrong. I could not figure it out.

You tap a button below the episode to create a compressed copy and transfer it to the Watch (full details). Episodes played from the Watch have lower audio quality, with voice boost and trim silence baked in, but that’s fine.

Seems like a cool app, but I want a podcast app that runs on my phone and iPad too.

Pocket Casts impressed me with its thoughtfully designed offline mode. It requires an in-app purchase, but their subscription is dirt cheap ($1/mo or $10/year).

I love Castro and its inbox model. However, the Watch playback bug and lack of an iPad app put it just behind Pocket Casts. Pocket Casts’ UI is iffy, but that Watch app is rock solid.